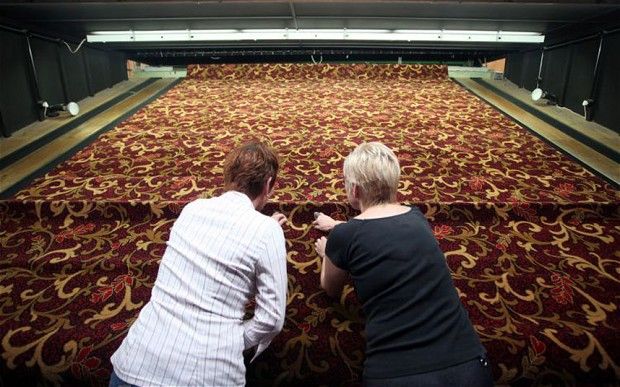 An overlooked and unloved part of the retail sector has seen shares in some of its companies rocket in recent months as it rolls out a recovery. Carpet may have been deeply unfashionable ten years ago but Britain’s love affair with wool weave is sparking a rennaisance in deep shag-pile.

The UK consumer is gaining in confidence and household incomes are now returning to pre-crisis levels. The greater certainty provided by a clear general election result should also reverse a dip in housing transactions between March and April of this year. As housing transactions pick up and purse strings are loosened retailers should rejoice.
With apologies to Mark Twain, reports of the death of the UK carpet industry have been greatly exaggerated. It is true that sales have been in a steady decline since the mid-1990s. The blame can be laid at Ikea’s door after it sparked demand for clean Swedish living and laminate flooring. The recession exacerbated the problem with carpet sales slumping from £1.2bn in 2008, to £968m by 2011.

Axminster, which made the carpet for Buckingham Palace and Clarence House, collapsed into administration at the start of 2013, before being rescued and turned around by local businessman Stephen Boyd.
Britain’s love affair with carpet may have waned during the dark days, but it never disappeared completely. Carpet remains the floor covering king commanding 57pc of all floor covering sales. British wool weave flooring holds its position as the first choice for bedrooms. The demand for retro living styles and growing consumer confidence means the UK carpet sector is now enjoying something of a comeback.
“It has been a very tough market but there is some light at the end of the tunnel, and they should enjoy a more robust period as overall demand for carpets is more established,” said Andrew Hartley, director of specialist market research firm AMA.
“People tend to write it off but unfairly so. On the back of general upturn in consumer confidence and spending and more buoyant housing market we feel reasonably confident carpet sales will grow,” he added.
The optimism of British consumers is picking up momentum and shoppers are out in force and this has resulted in a jump in retail sales in May, according to the latest figures from the Confederation of British Industry.
This upbeat outlook comes on the back of a 1.2pc increase in UK retail sales in April, according to the Office of National Statistics. The recovery in the UK economy is now trickling down to companies that have been slow to bounce back.These overlooked sectors create an opportunity for investors.
Carpetright, which is one of the UKs largest carpet retailers that controls about a quarter of the market, has undergone a significant change in management during the past 12 months. Founder and chairman Lord Harris resigned from the board in October last year, and his sons Martin and Graham also stepped down last May from roles of development director and chief operating officer respectively. The new chief executive Wilf Walsh, who was previously managing director of betting group Coral, took over last July.

Mr Walsh spoke of a “sustained recovery” during the fourth quarter to the end of April with UK like-for-like sales increasing by 10.5pc. The company said it expects to make an underlying pre-tax profit of about £13m, reversing a £7.2m loss last year.
Carpetright will report its full-year results on June 30, and analysts from Citi think the market has overlooked the recovery story. Citi expect further progress during the 12 months to the end of April 2016 with pre-tax profits increasing by another 30pc to £17m, giving 14.5p in earnings per share.
The shares have gained almost 60pc within the past six months and are not cheap trading on 24 times forecast earnings, but that falls to 17 times next year as profits continue to rise, and Citi have placed a price target of 600p.
Carpetright shares are certainly at the riskier end of the investment spectrum as markets continue to test record highs. That said, with a fair wind from the UK consumer they could have further to go with a catalyst being the annual results later this month.
Another option to look at would be United Carpets. This Aim-listed minnow reported an 18pc increase in first-half pre-tax profits to £534,000 at the end of September. The market consensus is for full-year pre-tax profits to rise to £1.1m, giving earnings per share of 1p. The shares on 11 times forecast earnings are trading at a big discount to sector peer Carpetright, but this rightly reflects the reduced liquidity and heightened risk in a company worth only £9m.

The management confidence was underlined by the announcement of a 1p special dividend last month, and investors can still pick that up as the shares go ex-dividend on June 4, with the special payable on June 19. After a torrid few years and restructuring of the store portfolio the company is expected to return to dividend payments this year and a catalyst for the shares could be the annual results due in July.
Victoria, which made the red carpet that was laid on the steps of Wesmtinster Abbey for the royal wedding, is also on a roll. The company said in its latest trading update at the end of April that it expects pre-tax profit to be ahead of expectations for the year to the end of March. Management added that trading in the first few weeks of the new financial year have also started well.

Victoria made the red carpet used for the Royal Wedding
Current city forecasts are for pre-tax profits at Victoria to jump more than 200pc to £7.3m, up from £2.28m last year. The shares have rocketed in the past 12 months gaining more than 300pc to close at an all-time high of 969.75p, and are now trading on 26 times forecast 2015 earnings per share of 37p. However, what is interesting here is that sales are forecast to increase to £200m, giving pre-tax profits of £10m, and earnings per share of 52p, in the year to March 2016. That leaves the shares on a more reasonable 19 times forecast 2016 earnings per share, and at a discount to sector peer Carpetright. Aim-listed Victoria shares also come with a fairly large health warning as they are high risk, but the July results offer the opportunity for upgrades.
Shares in the carpet retailers are certainly not for widows and orphans given the exposure to fickle consumer demand and the later stages of the UK recovery, but it could be an interesting play for the rest of the year.