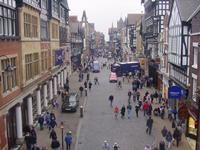 The high street is bouncing back despite the boom in online shopping as shop vacancy rates fall to their lowest level since April 2010.

Shop vacancy rates fell 0.1% in September to 12.9% as the situation improved across the country, with no regions recording an increase in the amount of vacant shops, according to the Local Data Company.
The vacancy rate in towns was 0.6% lower year on year as the North of England led the way. Vacancy rates were down 1% in the North East, 0.9% in the North West and 0.8% in Yorkshire and the Humber.
Wales and the West Midlands recorded a 0.3% and 0.4% fall in vacancy rates respectively.
Shopping centres are performing even better than towns as their vacancy rate dropped 0.9% year on year.
Matthew Hopkinson, director at The Local Data Company, said: “Clearly this is very good news that vacancy rates are at their lowest level for over five years.
“Ultimately consumers have more money in their pockets as a result of wages being higher than inflation, employment levels are improving and there is greater focus on the living wage as well as zero-hours contracts. This combined with all time low oil prices and interest rates makes for an improving retail economy.”
However, Hopkinson warns that the “devil is in the detail” and highlights that some former shops are being repurposed.
Over 400 shops, representing 0.1% of the total stock, were removed from the overall stock as a result of change of use, demolition or redevelopment.