‘Jury out’ on December footfall

Retail footfall suffered a double-digit drop last week and will need a major rise this week, if it is to match last year.

According to Ipsos Retail Performance’s Retail Traffic Index footfall leapt by 20.9% in the wek beginning 24 November, thanks to the combination of Black Friday campaigns coinciding with pay day week.

The following week, was somewhat quieter, down 3.1% on the previous week, before falling again over the week beginning 8 December.

Ipsos has revised its December-on-December forecast downwards by 1.4% to -6.1%.

Retail footfall is slightly down against forecast this week according to Ipsos.

‘Last week was something of a surprise following the first fortnight of the month which fell in line with predictions. Footfall decreased by 1.8% week-on-week and by 10.6% against the same week of last year. We would normally expect to see slight growth week-on-week in week three before building again sharply to its crescendo on Super Saturday in the final full week before Christmas,’ says Tim Denison, Ipsos director of retail intelligence.

‘We are not overly concerned at this point, but this is the week that really matters as it will shape the outcome of the Christmas campaign. Anything short of a 12.5% lift in footfall against last week would signify a disappointing end to another difficult year for retailers. The jury is out where we will end up.’ 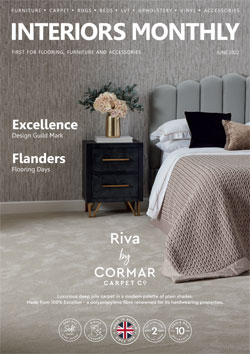 The June 2022 issue of Interiors Monthly.