McCann, 70, is a former Jury’s Inn ceo and founded the €1bn Dalata hotel group in 2007. He is due to step down as ceo later this year, but will remain a director for another year.

‘Pat has been a mentor and advisor since day one. Would you believe I met Pat over four years ago at a networking event in London where we discovered we both attended the same school in Ballymote, County Sligo, Ireland albeit with a few years in between,’ says Deirdre McGettrick, ufurnish.com ceo and co-founder.

‘The business has grown up over the course of the past year, raising £2.3m [in investment] and hiring superb talent like Tino Wood, the ex cmo of DFS and David Marshall, the ex cto of Bookatable and Lastminute.’

McCann has just over a 1% holding in the website, which allows shoppers to search for products from more than 100 retailers in on place rather than having to search retailer’s individual websites. 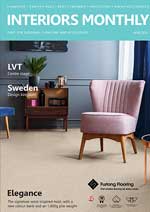 The April 2021 issue of Interiors Monthly.