Footfall rose by 11.6% according to Springboard, compared with the week before, as the Bank Holiday and good weather encouraged shoppers.

‘A combination of the late May bank holiday, incredible weather and the school half term holiday had a hugely beneficial effect on customer activity in UK retail destinations last week; it not only led to the greatest weekly increase in footfall since the reopening of non-essential retail in April, but also the most modest annual decline since the start of the pandemic,’ says Diane Wehrle, Springboard insights director.

‘The fact that the bank holiday occurred a week earlier than in the previous two years, meant that footfall in both coastal and historic towns was actually higher last week than in the same week in 2019. Whilst the attraction of coastal and historic towns to visitors meant they benefited the most last week, there was still a significant rise in footfall in central London and in other regional cities across the UK, whilst the most modest increases once again occurred in more local high streets.’ 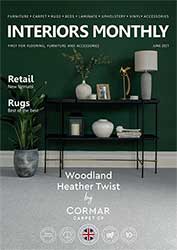 The June 2021 issue of Interiors Monthly.