Mike’s Carpets building on the market 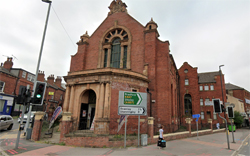 One of the most iconic flooring stores in Yorkshire has gone on the market for the first time in more than a decade.

Mike’s Carpets, in Armley, Leeds became well known in the county through its TV advertisements featuring owner Mike Smith and its larger posters outside the former Methodist chapel.

The store had been run by MC Carpets for the past decade but with the retirement of the firm’s directors, Smith has put the building on the rental market.

‘It is a great opportunity for someone to take it on. The fact it is well established and known, the trade is there. That doesn't suddenly stop, lots of people go there each day,’ says Smith.

The August 2022 issue of Interiors Monthly.